In a world as rich an real as our own, Richard Rahl and Kahlan Amnell stand against the ancient forces which besiege the New World–forces so terrible that when they last threatened, they could only be withstood by sealing of the Old world from whence they came. Now the barrier has been breached, and the New World is again beset by their evil power. War and treachery plague the world, and only Richard and Ahlan can save it from an Armageddon of unimaginable savagery and destruction (goodreads.com) 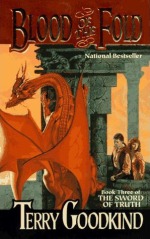 After reading the previous Sword of Truth book, I had to start the next one right away. Blood of the Fold is not a bad book, but its not the best either. It is a filler with its own plot, climax, and resolution, and sets the stage for the following books. It is definitely part of a series and is not meant to be read alone or before the others. It seems like people either like it or hate it. For me, I enjoyed this book as much as the others.

The story begins right after Stone of Tears ended. It is a little slow at first, but eventually picks up pace and flows quite well. There were some parts that were not too interesting and other parts that were exciting and kept me interested in the story.

There are multiple plots throughout the book, which helps to keep you engaged. Some are solved within this book, but others set the stage for future novels. A good portion of the book is politically driven (still interesting if you don’t like politics) since Richard is asking other parts of the world to either stand with D’Hara or become their enemy.

As with the previous books in the series, this one is just as violent. If the other books bothered you with the violence (raping, gore, language, etc) then this series may not be for you. The ending is also rushed, which bothered me. After reading so many pages I thought there would be more of an ending.

Again, all the main characters are separated in the story (though Richard and Kahlan were never actually brought back together in the previous book). I particularly do not like this, as do some other people, but others don’t mind. The only problem I have with it is that their reunion is always a bit rushed and not as exciting or dramatic as I thought it should be. Tends to be wrapped up in a couple of pages. The main focus of all of these books has been someone trying to take over the world or rid it of magic and Richard comes to save the day. It happens again in this book with the Blood of the Fold, as it did in the previous books with Darken Rahl and the Keeper. A repetition in plot does not make the story boring. I thought Goodkind did a marvelous job making it interesting.

The new characters in this novel are intriguing. The Blood of the Fold wants to rid the world of magic and one of them in particular, Tobias, is a pretty nasty character. There is also a brief mention of Jagang, who is a “dream walker”, but his story picks up more in the following books. You also learn more about Gars and are introduced to Mrishwith. The Mord Sith are also very interesting characters and play a huge role in the series as Richard’s body guards.

Goodkind’s writing is getting a bit better, but is still repetitive. This is probably explained by the publication date of the books. If you read them as they came out then it was a good thing for him to remind you of past events, but it just gets tiresome when reading them back to back.

This was a great addition to the series and was really entertaining. If you liked the previous books than make sure to read this one!

Wikia page for Blood of the Fold (contains many spoilers; best look at after reading the book)

My other reviews in this series

The Sword of Truth series, by Terry Goodkind (adoyleblog.wordpress.com)