A millennia-old prophecy was given when the Forbidden Ones were driven from Achar. And now, the Acharites witness its manifestation: Achar is under attack by an evil lord from the North, Gorgreal-his ice demons strike from the sky and kill hundreds of brave warriors in the blink of an eye.

One young woman, Faraday, betrothed of Duke Borneheld, learns that all she has been told about her people’s history is untrue. While fleeing to safety from the dangerous land, Faraday, rides with Axis, legendary leader of the Axe-Wielders-and hated half-brother of Borneheld-and a man Faraday secretly loves although it would be death to admit it. She embarks on a journey, which will change her life forever, in search of the true nature of her people. (goodreads.com) 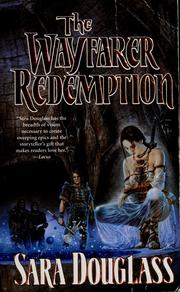 Sara Douglass’s first book, The Wayfarer Redemption: BattleAxe was a great start to what seems to be a very good series. It took me a few chapters before I really got into it, but then I was hooked! I realize there are a lot of negative reviews of the book, but after reading their reviews I disagree with a lot of what people say.

I thought the plot had original aspects, was interesting, and not too complex nor too simple. It is one of the better good vs. evil fantasy books I have read; however, it is pretty much just that. Douglass doesn’t have any gray areas. That doesn’t bother me too much though. It’s just what a basic fantasy book is about and that’s what I like about it. Not to mention that she has all the elements of a good fantasy book including different races, a prophecy, and magic (though it’s a little different than many novels). Throughout the story there were plenty of little twists, so I didn’t find it to be entirely predictable. Also, I almost found myself crying during some parts! It’s definitely an emotional story.

I also enjoyed the world building. I thought the author did a fantastic job with her descriptions of the places the characters travel. There wasn’t too much detail nor too little. This was important because throughout the entire novel the characters are traveling.

Douglas doesn’t have the greatest of characters, but I enjoyed them nonetheless. I really fell in love with Axis throughout the novel, and I disliked Bornheld with a passion. It was great to actually care about some of the characters, or have feelings toward them (love, hate, etc) because that is what really gets me involved in a story besides a good plot. Axis is the leader of the axewilders and you get to see him change throughout the novel. He is probably the only character in the novel who has decent character development. Once he is no longer under the “protection” of his caregivers he realizes everything that he was taught may be wrong. Faraday is a highborn lady who is betrothed to Duke Borneheld, the half-brother of Axis. She has quite an emotional journey throughout the novel trying to figure out her place in the prophecy and why she had to be chosen.

Axis, Faraday, and Borneheld are the main characters in the story so far. There are others who go along with them on their journey including Axis’s second in command, some Sentinels, and Faraday’s champion, as well as others they meet on the way.

This was one of the few novels I have read where the writing and the dialog are actually good. I didn’t have any problems with it or find anything to be repetitive.

This particular book doesn’t really have an ending so if you want to read the book be prepared to read the series!

I would recommend this novel to any one who loves fantasy! It is not the best fantasy book I have read, but it is still very enjoyable. If you are newer to fantasy this is a great place to start. There is a little violence and some subtle sexual content, but it should be fine for anyone over 16.

One thought on “BattleAxe (Wayfarer Redemption #1) by Sara Douglass”