King Shrewd is dead at the hands of his son Regal. As is Fitz–or so his enemies and friends believe. But with the help of his allies and his beast magic, he emerges from the grave, deeply scarred in body and soul. The kingdom also teeters toward ruin: Regal has plundered and abandoned the capital, while the rightful heir, Prince Verity, is lost to his mad quest–perhaps to death. Only Verity’s return–or the heir his princess carries–can save the Six Duchies.

But Fitz will not wait. Driven by loss and bitter memories, he undertakes a quest: to kill Regal. The journey casts him into deep waters, as he discovers wild currents of magic within him–currents that will either drown him or make him something more than he was (goodreads.com). 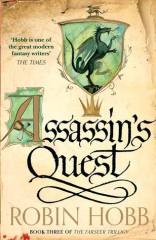 Unlike the other two books in this series, which move pretty slow, this one moves even slower. For most of the book I was actually pretty bored, but continued to read because I loved the characters.  I needed to know what was going to happen and I haven’t decided whether or not I am satisfied with the ending.

The beginning was pretty interesting as Fitz overcomes his near death experience, but the middle of the book is where I was utterly bored. Fitz goes off to Tradeford to attempt to kill Regal without really having a plan. Though this fits with his character I thought this entire 100 or more pages was actually unnecessary. If it wasn’t for Nighteyes being his companion through all of this I highly doubt I would have finished it.

Once he fails miserably at this, he moves on to try to find Verity, which he spends almost the rest of the book trying to do. It does make sense that it would take him awhile with Regal after him and trade with the mountain kingdom suspended, but Hobb didn’t make this adventure that interesting. Ninety percent of the book consists of Fitz walking from place to place! I don’t need a lot of action in a book, but I need something more than this. If it would have been a shorter book I think it would have been much better. It was dragged on for way too long. By far the weakest of the series.

After reading so many pages of Fitz endlessly walking around, I expected the ending to be pretty good. It was okay, but not great. It wasn’t as awesome of an ending as I was hoping for. I thought maybe magic would have played even more of a role than it did and what happens to Verity destroyed me. It was so upsetting. After all Verity did and everything his wife went through! 😦 The very ending of the book also seemed a bit rushed, especially compared to the rest of the novel.

I love Fitz, but most of the time he is an idiot and doesn’t think things through. It became very frustrating by the end of the book. At least his bond with Nighteyes makes him more interesting! Nighteyes is just incredible and I love the way he thinks about things. I at least liked how Fitz was able to develop more of his skill as the book went on and what he does to Regal is just awesome. It was all his longing for his past that he wanted to leave behind in the first place that became kind of annoying to me. He complained about it the entire book. Ugh.

Towards the end of the book we finally get to see more of the Fool and he has changed quite a bit. Everything he does along the journey to find Verity helped to keep me interested in the story. He is a very interesting character and I adore the relationship that he has with Fitz and, eventually, Nighteyes! Very entertaining.

Regal, as usual, is just as annoying as ever. I really hate him and am glad how he ended up.

There are some other characters that Fitz picks up along the way, but the most notable would have to be Kettle. She is very elderly, but insists on going with him to find Verity. I just love her and the secrets of her past! She is one of the strong female characters in this story besides Kettricken.

Robin Hobb is an amazing writer! Everything flowed really well and she really knows how to tell a story. She is just a little long winded at times and needs a bit of help shortening her story to make it more interesting.

This final book in the trilogy was a bit of a let down. I wasn’t too impressed with it and it was very long winded and difficult to get through. However, I stuck with it because I wanted to finish the series and I adored the characters.

As a series, it is pretty good. The characters are memorable, well developed, and entertaining, but the plot just moves a bit slow. I would recommend reading this because, despite its flaws, it is still a good story. I just don’t think I would ever re-read it.

My other reviews in this series: