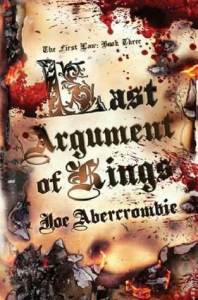 The Last Argument of Kings begins where the previous book left off. The war against both Bethod and the Gurkish are not going well for the Union, the latter being far worse. Also, the King of the Union is on his deathbed and the closed council must elect a new king as the current has no heir.

This is by far the most action packed of the three books with the conclusion of both wars, as well as being the most exciting and engaging. Not to mention all the twists, turns, and betrayals that just left me dumbfounded. I believe it is also the longest of the series, but moves at a great pace. By the time I finished the book I just wanted more!

Although I loved the ending and nearly everything was wrapped up perfectly, there were still a few things that I wanted to know about including what happened a thousand years ago and to see Emperor Uthman-ul-Dosht and the prophet Khalul. These two were mentioned several times but we don’t get to see them. Maybe they will appear in another book within the same world.

Despite that one setback I thought this book and the series as a whole was fantastic! It is officially in my top ten favorite series!

As we all know the characters are what really drive this story and so many things happen to them in this book that I was shocked! Each character was perfectly written; they each had their strengths/weakness, they all had flaws. The author creates perfect characters that you can either love, hate, or just have mixed emotions about.

Logen is still the bad-ass he has always been and is still struggling with his other half. He really just wants to be a better person, but the Bloody Nine won’t stand for it. I suppose he gets what was coming to him, but I can’t say that I am happy about it.

Luther is becomes a much better person and finally gets everything he has always wanted. He soon realizes that he completely hates it and just wishes everything would go back to the way it was before. Jezal’s character completely changes throughout the story and becomes someone you truly care about. After the first book I never thought I would say that! His character has one of the biggest twists in the book!

Glokta is still an awesome character, but soon realizes he may have to many bosses and doesn’t know what to do. He was betrayed several times, uncovers treason, ascends to a position of high power, and ends up getting married! Wow! I think he is one of my favorite characters just because he is so relate-able and is absolutely hilarious in a depressing sort of way.

Bayaz becomes really scary in this novel, I mean very scary, and is hiding so much more than you can possibly imagine. Another huge twist in the book. I thought I loved his character, but I was wrong. Kudos to Abercrombie!

Finally, there is Ferro who gets the opportunity for vengeance that she has wanted so badly.

A perfect ending to a great series! This has become one of my favorites and I would gladly read the entire trilogy again! I couldn’t believe all the twists and turns in this book, not to mention the betrayals. There was so much I didn’t see coming! This series is a masterpiece and I highly recommend reading it! If you have read it than I hope you enjoyed it as much as I did.

Check out these other reviews of The Last Argument of Kings by fellow bloggers!