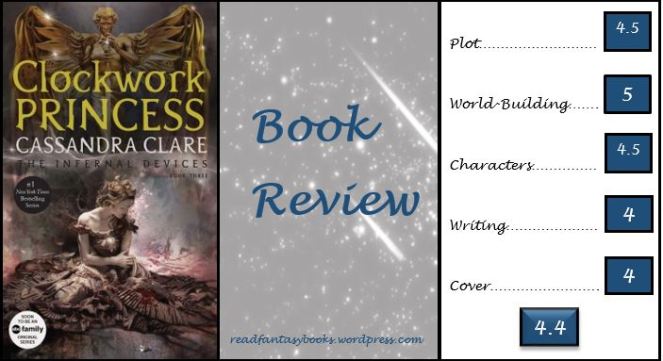 The plot was exciting, intense, and unpredictable and the book contained a perfect blend of action and character development. Loose ends are tied up and the ending was absolutely perfect! I cried quite a bit but enjoyed doing so. The characters are incredible and I loved all the relationships that developed between them; I am glad where they all ended up. I was pleasantly surprised that the writing of this series/novel didn’t bother me at all, it was actually pretty decent.

I very much enjoyed this book and the ending and I know that you won’t be disappointed. It is an incredible ending to an entertaining, emotional series!

Clockwork Princess takes place directly after Clockwork Prince and I can’t believe how incredibly good this finale was! I was so engaged in the book from the very beginning that I just couldn’t put it down even though I wanted to savor every page. The enjoyment factor for this book was 5 stars!

The pacing was great! It started off rather interestingly with Benedict Lightwood and the results of Demon Pox. This was an incredible way in which to begin this book and I found it fascinating and engaging.

I rather enjoyed how well the author was able to blend action and character development so perfectly to create such an exciting story. Not to mention the awesome plot twists! This helped to even out the pacing so that when there was little action it was all still very interesting.

The plot was so unique and engaging! It was such a fun, unpredictable read and I very much look forward to the follow-up series in which many of these characters return. 🙂 The epilogue was just spectacular! Oh, so many tears!, though I was happy about how it ended.

I don’t think I have shed so many tears reading a book in a while! Don’t worry though because there are happy and funny moments as well!

I would have liked the epic battle against the automatons to be a bit more awesome. It was kind of a let down and so easily solved even though the creatures appeared to be unbeatable.

I was surprised to find that the world is expanded upon! We get to “see” what Demon Pox can do to someone, in this case it was Benedict Lightwood, and it was fascinating, yet disturbing. 🙂

I very much enjoyed the automatons, especially toward the end of the book when they become even more creepy!

The thing that I’m glad was finally revealed in this book was Tessa’s Clockwork Angel. This was so amazing! Also, we get to find out about Tessa’s birth and what she actually is! 🙂

All the characters develop quite a bit in this book. If you have been reading the books then you know how awesome each and every one of them are. Will is great and I just adore him, Jem is so sweet and caring, and Magnus is just awesome!

Gabriel and Gideon Lightwood have a much larger presence in this book and at first I hated Gabriel, but he grew on me eventually. His loyalties to his family name and his father cause problems at first, but he comes around and realizes that there are more important things.

Cecily is the newest of the characters and I can’t say that I actually thought much about her. I know she is Will’s sister and that is the only reason why I cared for her. Otherwise, she didn’t have that distinct, interesting personality that I always look for in characters. Not like any of the other ones in the story anyway.

I was surprised to find that the writing and dialogue were fairly decent. I can most definitely say that these books are written SO MUCH BETTER than the Mortal Instruments at least. I was never distracted by the writing as I was in the other series; there were much fewer similes/metaphors.

I actually like the cover though I still wish it wouldn’t have been photo realistic. I wish the spine art on the box set would have been continued around. At least the series name and the number (yay!) are written on the spine of the book. This way you don’t have to spend forever trying to figure out which book it is in the series. The major thing that bothers me are the stupid stickers that had to put on the most recent additions. UGH!