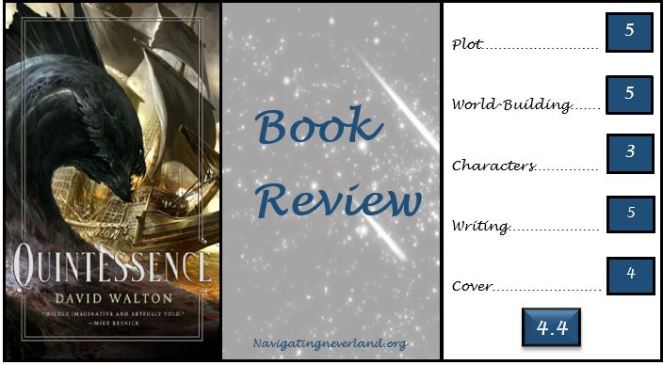 Quintessence is a fast-paced, engaging, historical fantasy adventure that had me captivated from the very first page. The plot is unique and entertaining and includes some astounding world-building. The protagonists are interesting, multi-dimensional and well-developed but the secondary characters were a bit lackluster. I even enjoyed the writing.

Quintessence takes place in Mid-16th century England with elements of an alternate history–in this case this world is flat, and the further you travel to the edge the more potent magic is. A ship arrives back in England with tales of a mysterious island with strange creatures and riches beyond your wildest dreams but no one knows for sure if this is true since the treasure brought back is nothing but sand and all of the crew is soon dead. However, a few of the items aboard survived and Sinclair is the one to discover them. Sinclar is an alchemist who will stop at nothing to accomplish his life goal of discovering the fifth element said to be capable of turning base metals into gold and bringing the dead back to life. He believes this island, named Horizon, holds the key and may risk everything getting there.

This book is divided into three main parts: the first part introduces us to our main characters, takes place in England, and gives us a look into this world and what is occurring during this time period; the second part of the novel we spend on a ship traveling to Horizon; and the third half of the book focuses on exploring the island.

All you need to do is read the three-page prologue to this book and I think you will be hooked. I know I was! It’s one of the best introductions I have read! Anyway, I wasn’t sure if I was going to enjoy this book, especially because it is historical fantasy, but I really found myself liking it. There was so much going on and so much information in such a short novel that I was never bored, the pacing was perfect! In fact, I had quite a few moments in which I was excited or just downright angry (Catholics attempting to convert Protestants to their religion was horrible and just making me incredibly upset). The war between science and religion was incredibly entertaining and a huge part of this novel. I just couldn’t wait to finish the book and find out how it was all going to end.

There was a lot of information in such a short novel, but it was concise and interesting. Even though I didn’t know much about the time period nor some of the people the characters were referring to, I didn’t have a hard time following along. Though complex, it wasn’t difficult to understand.

Since the world is very similar to ours there wasn’t too much that needed to be done while the plot was set in England; however, this changes once the characters journey to Horizon where all sorts of amazing, magical creatures thrive. I thoroughly enjoyed discovering the island with the characters. Since this is their first time in a new land we don’t know any more than they do and settling on the island was a whole new adventure. I feel like this might have some similarities to when the English traveled to North America and settled in the U.S.

Everything was well described and detailed. The creatures were spectacular, interesting, and unique and I loved learning all about Sinclar’s alchemy as well as how this flat world works.

Most of the characters who join the expedition are running away from the counter-reformation of England when Catholics are trying to regain their control and convert all Protestants by any means necessary. This was interesting to read about since I actually know little about it and I can say that I was utterly appalled. This book makes me hate religion even more than I already do, though I won’t go into any more detail here because I don’t want any arguments about it on my post. Just know that I was upset about it throughout the entire book and just couldn’t believe what these people were doing.

All the science terms and theories were explained really well and I didn’t have too much trouble following that.

Parris is the Physic in King Edward IV’s court. He is doing everything he can to learn how to better save people’s lives and this includes cutting up cadavers and seeing how the body works, which is forbidden. If ever found out it could mean his death. I really connected with him as a character because I appreciated what he was doing even though everyone said he shouldn’t , and the reason for his dissection and utter obsession made him that much more human to me. He is an interesting, well-developed character, and I enjoyed watching him change throughout the novel. His inner conflict between religion and science was also fascinating.

Sinclair is an alchemist whose obsession is finding Quintessence, the fifth element that is said to give people immortality, among other things. He will stop at nothing to obtain and understand it. I liked Sinclair almost as much as Parris. Sinclair was just so selfish and focused on finding Quintessence, which gave him his own personality. He wanted nothing more than to live forever and I couldn’t believe how much he grew as a person throughout the novel. Most of the time I was dumbfounded as to how far he was willing to go and the decisions that he made, especially towards the end of the book.

“If she had been a boy, he could have included her in his work, taught her a physic’s profession. But because she was a girl, the best thing he could do was keep her safe.”

Catherine isn’t the average teenage girl you would expect to find in the mid-16th century. Instead of wanting to find a suitable suitor, settle down, get married, have kids, and be a housewife, Catherine wants nothing more than an adventure and to discover new things. She is an incredibly smart girl growing up in the wrong time. I really liked her determination and sense of adventure. I felt like I could really relate to her. She was interesting and I also enjoyed watching her develop throughout the novel.

I didn’t have any problems with the writing. I thought everything flowed well and was informative and interesting, yet concise.

The cover is gorgeous and is the reason why I looked at the book in the first place. I love that it depicts a scene from the book (though I may have chosen something different)  and it is very clean and well-designed. There is a blurb on the bottom, which is unfortunate in this otherwise almost perfect cover.

a Fantasy Reader     Every Day Should Be Tuesday