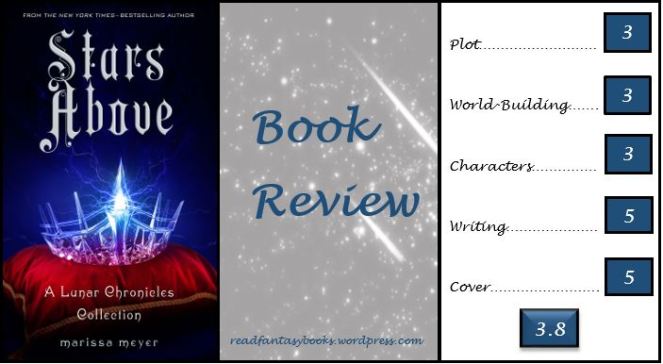 Since this is a short story collection I thought I would briefly describe each story and what I thought about it. Each mini-review contains a rating, so overall the book ends up with 3 stars. Once I added in the writing and cover it boosted it to almost 4. Overall, it was a decent collection of nine stories though I wish more of it would have taken place after Winter (only one does), the rest are set before or just at the start of the series.

As a whole, I enjoyed these stories however, the only ones that I really loved and thought were worth reading were Glitches and Something Old, Something New. I wish all of them would have added something to the world, but instead they felt more like fan-fiction. 😦

I will mention that the writing of each story was fantastic and that the cover of the book is awesome!

A prequel story that explains how Cinder came to be in the care of Michelle Benoit, and showcases Scarlet as a child and the hardships she had growing up with an unloving father.

This was interesting, but I thought it was unnecessary because I could imagine most of what happened in this story just by reading the series. Though I liked ‘seeing’ Michelle, I kind of already imagined what she was like as well as what she went through caring for Cinder, and I could easily picture what Scarlet’s life was like just from the brief information in the main series.

This was a fantastic story about Cinder meeting her family for the first time! I was filled with emotions over this one!

Right away we realize that her step-mother thinks she is an abomination, but we also discover sweet, sweet Peony. She befriends Cinder right from the beginning and they do everything together. Peony even thinks Cinder is cool because she has a computer in her brain. We realize how close Peony and Cinder were; how much they cared for each other.

I thought this would have been a great introduction to the first book because it would have made Peony’s death that much more impact-full. Honestly, I only cared a little about her in the first book because I didn’t know much about her. After reading this I shed a few tears for her because it was so upsetting that the one person Cinder cared for and who cared for her was taken from her. It wouldn’t have made the book much longer either.

In this prequel, we are introduced to Levana’s special army, but it mainly focused on Wolf as a child, how he became a soldier, and how hard he fought to prevent himself from becoming a monster.

This wasn’t actually an interesting story, but it does give you an insight into Wolf’s feelings and what he really thought about the whole situation. If he is one of your favorite characters then I am sure you will love reading this one, but it didn’t cut it for me.

Carswell’s Guide to Being Lucky

I love Carswell and I thought we should have learned more about him throughout the series, but we were still given enough to get to know him fairly well and just simply fall in love with his amazing personality.

This prequel tells us more about his personality and what really motivates him. All he cares about is wanting to fly and he swindles people out of money to save up for his own ship. We are also introduced to Kate Fallow who was mentioned in the series and discover that Carswell may have actually had real feelings for her.

Though this story was charming, it wasn’t actually necessary. I didn’t really need to or want to know anything that happened. I don’t feel any different towards Carswell from reading this story. If you really like him as a character and what to know more about what he was like as a young teenager than I recommend reading this one. I’m sure you will love it.

After Sunshine Passes By

In this prequel, we ‘see’ Cress as a child and how she ended up in her satellite.

This wasn’t something that I was really interested in knowing. I kind of figured out how it all happened anyway. I just don’t need every detail explained. I love Cress, but this story just wasn’t what I wanted. We could easily imagine how she felt being sent to live in this satellite all alone.

The Princess and the Guard

This prequel takes place between Fairest and Winter and what forced Winter to want to stop using her gift. It begins with her and Jacin as children playing a child’s game, and we can easily see over the course of the story the bond that they share. We know they were close and that they love each other, so I didn’t need an incredibly long story to tell me that.

I enjoyed learning more about Winter and how she felt about her gift and the changes that occurred with her as she matured, especially the consequences of not using her gift. It was interesting to ‘see’ a Winter that wasn’t having hallucinations all the time.

After finishing this story I had no idea what it was doing in this collection. It is apparently a re-telling of The Little Mermaid set in Meyer’s world. We follow a droid who has an infatuation with a human, ends up saving his life, and eventually realizes that he is in love with someone and that she could never be with him.

This story doesn’t contain any of the characters we are familiar nor was it very interesting. I wasn’t even sure I was going to finish it.

Instead of this story, I wish there would have been one that focused on Iko, but we get a droid called Miko. I wasn’t at all impressed with this one, despite it being well written.

This is the story of Kai and Cinder’s very first meeting but in the point-of-view of Kai.

Although I loved this moment from the first book, I didn’t really need it told in Kai’s perspective. It was interesting and I really LOVE Kai and Cinder so I didn’t actually mind reading this one. It gives you a view into Kai’s thoughts and how important it was for him to get is android fixed so he could get the information she contained in order to save his country from Levana.

I enjoyed this story but didn’t feel it was necessary.

Just based upon the title I knew this was going to be the story that was actually set after the series and I was so excited to read it. I’m sure you can imagine what this one is about!

However, though I REALLY enjoyed this story, I was disappointed that it wasn’t the wedding I was expecting. 😦 It takes place two years after the events in Winter and tells the story of the wedding between Wolf and Scarlet.

It was so great to see all my favorite characters again and to learn what they have been up to! I even loved the wedding! It was so romantic!

The ending was spectacular! Now I just need another book to portray the events after this one ends! Please write one more Lunar Chronicles story set further into the future!

3 thoughts on “Stars Above (Lunar Chronicles #4.5) by Marissa Meyer”