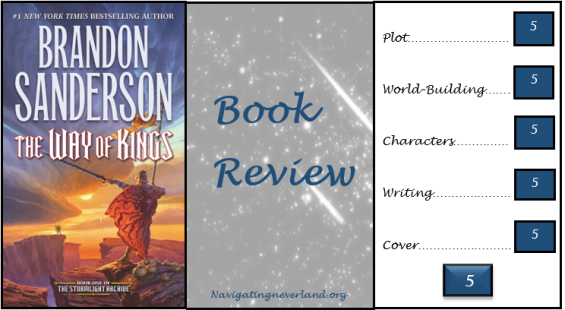 I know there are thousands of reviews out there for this book, so I won’t go into too much detail here. I just wanted to express how much I love this book! It is one of the best books I have ever read and I have now read it twice! If you haven’t picked this up and read it yet for whatever reason don’t wait any longer. I guarantee that if you love fantasy and a great story this one won’t let you down. The plot is incredible and complex, but easy to understand, and the characters are very personable,  interesting, and well-developed. Not to mention that downright bewildering world-building and outstanding writing. READ. IT. NOW.

The amount of detail and world building consumes a lot of the book as well as background information on the characters. What makes this book so good is that I found nearly everything to be interesting, entertaining, and engaging. There were only a few instances in this massive story when I came across some chapters that weren’t as interesting. However, from the very first page of the prologue I was hooked on the story until the very last word!

The pacing of the book is incredible! I don’t think you will be disappointed on the amount of detail that Sanderson provides in order to build up his world and characters. There is rarely a dull moment in the entirety of this book. I loved how seemingly minor, irrelevant plots came together with the larger ones at the end. I also enjoyed how this book was not at all predictable! Seriously, I don’t think you will be able to predict anything!

Don’t be concerned with the size of this book! You will be so engaged in it that you wont even notice! By far this is one of my favorite books I have ever read!

I think in the case of this book you have to discover most of the world on your own, but I will say that it is immense and completely amazing! The cast system is interesting, the weapons and armor, and even the magic system is incredible. There is so much history and so much more to learn! All the creatures and plants are even unique. I thought it was interesting that women take on the more scholarly arts such as reading, writing, and art while men just seem to go to war and it is frowned upon if they know how to read or write. This is just one of the many things I could discuss but it would take FOREVER, so I’m just going to restate here that the world-building is one of the most vast, most unique worlds I have ever read in a fantasy novel and this is just the beginning; there is so much more to uncover.

Sanderson really has a way with characters and he did a fantastic job in this book. They are all well developed, multi-dimensional, and have their own personalities. I even enjoyed the side characters!

My favorite, and the most interesting character, is Kaladin. Since we visit him in the present and have flashbacks to his childhood we learn a lot about him. I felt really connected to this character and cared about what was going on in his life. Sanderson made him very personable. He also has a spren that eventually starts following him around. Her name is Syl and I love her just as much as Kaladin. She is an interesting character and their is definitely more to learn about this mysterious spren.

I wasn’t a fan of Shallan’s chapters at first, but then a twist reveals itself and some shit goes down. Her chapters are the second most interesting and I looked forward to every one. She is an intriguing character of minor nobility who has a terrific, yet mysterious drawing ability, and another ability that reveals itself much later in the book, which was very surprising! She is a well-developed character and I hope to learn more about her past in another book. She ends up as a ward to Jasnah (the daughter of the slain king).

Dalinar, a high-prince of Alethkar and brother to the slain king, is a man of honor and code who frequently has visions of the past that are supposed to help him unite the high-princes of Alethkar. Thought to be going mad by many, his reputation dwindles and no one is willing to follow him. As with many of the others, Dalinar is a unique and interesting character in the story. He is well-developed, has his own personality, and I look forward to reading more about him in later books. I especially want to know about his past. He is a man of honor now, but I don’t believe that was always the case.

The writing and world building are absolutely fantastic. Everything written is somehow important to the story; however, I suppose that some of the battle scenes could have been a bit shorter, but they were interesting nonetheless. Fantastically written story and I love reading in the point of view of each of the main characters!

It’s absolutely gorgeous! I love the illustration, the prominent author’s name, the title, and that it clearly states it is part of a larger series.

Geekritique        Definitely Not for the Birds