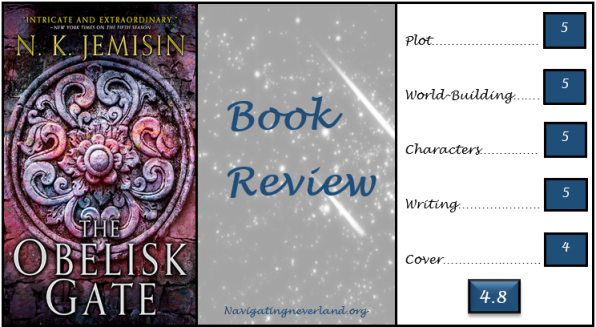 Such a great continuation of the story! I loved every minute of this novel and can’t wait to begin the next one. The plot continues at a perfect pace, the details are spot-on, and I enjoyed the world-building immensely. The characters also develop a lot and I can’t wait to see where the story takes them next.

The Obelisk Gate picks up right where the previous book left off continuing the adventure of Essun and Nassun. This time around however, we get Nassun’s perspective, so of course I had a hard time jumping into this one because of this change. Though it didn’t take too long before I got back into it and started to enjoy her side of the story.

“It’s not hate that you’re seeing. Hate requires emotion. What this woman has simply done is realize that you are a rogga, and decide that you aren’t a person, just like that.”

I thought the pacing was perfect and was surprised that this book failed to suffer from the “middle book syndrome”; it was just as engaging and interesting as the first. There was plenty of character development, which I thoroughly enjoyed mixed perfectly with plenty of action and suspense.

Even though the story is a bit complicated, everything is explained well and I am enjoying the complexity of the story without it being too confusing. I also love that it is entirely unpredictable. It’s so much more enjoyable to read a story when you are unsure of the ending. I like the slow reveal of information as well even though the reveal tends to lead to more questions.

The world building is truly amazing! It is complex and well thought out, as well as being perfectly detailed to immerse you into the world of The Stillness. Exploring the new comm and learning how it worked was awesome, not to mention learning more about the obelisks! The magic system seems incredibly complicated and I just have to know more about it just like I now need to know even more about the Stone-Eaters! We see more of them in this book and they are incredibly fascinating.

“The way of the world isn’t the strong devouring the weak, but the weak deceiving and poisoning and whispering in the ears of the strong until they become weak, too.”

Essun develops quite a bit throughout this book as she finally learns what it means to be part of a comm and not hide who she is. She learns so much from the other “roggas” that she is learning things even Alabaster failed to truly understand due to Fulcrum teachings. I can’t wait to see what she will do in the following book! Oh, and poor Alabaster. 😦

“There is such a thing as too much loss. Too much has been taken from you both – taken and taken and taken, until there’s nothing left but hope, and you’ve given that up because it hurts too much. Until you would rather die, or kill, or avoid attachments altogether, than lose one more thing.”

It took me a little while to get into Nassun’s story but the further I got, the more interesting it became. Her story starts back at the beginning after her father kills Uche. Nassun is learning to use her abilities and make use of the minimal training she received from her mother. Upon reaching Found Moon (a place Jija thinks will rid Nassun of her orgeny) with her father, she no longer has to hide who she is from others but can only manipulate her father for so long into believing she is a normal child. She eventually learns that her father does despise her and doesn’t love her as he should. As a result, she looks to another to be a father figure and receive the love and care she so desperately needs. It was difficult watching her childhood just slip away as she slowly becomes something else.

*Spoiler* I can’t believe Schaffa survives and what is going on with him is intriguing and mysterious. Who is the voice? I have ideas but which one is right? Could it be Father Earth? If Nassun removes it what would happen? I need to know what is going on! *Spoiler*

Just as well written and poetic as the first!

Absolutely gorgeous besides the blurb on the cover! Though I’m not sure what the illustration is supposed to be. Hmm.